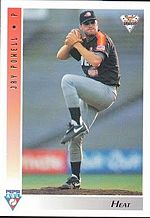 Powell played high school ball at West Lauderdale High School, where he played third base and pitched and won a Mississippi state championship. He was the All-Tournament first baseman in the 1990 World Junior Championship, hitting .444 with a tourney-best four homers and 19 RBIs in nine games for the Bronze Medal-winning USA. He was then selected by the San Diego Padres in the 1990 amateur draft but did not sign, opting to attend Mississippi State University instead. Over three years at MSU, he saved 17 games, and he was then selected by the Baltimore Orioles in the first round of the 1993 amateur draft.

While still in the minors, Powell was traded to the Florida Marlins for Bret Barberie following the 1994 season. With the Marlins, he was the winning pitcher in Game 7 of the 1997 World Series. He fractured his humerus in his final big league game on July 29, 2005, pitching for the Atlanta Braves. He ended his playing days with the most consecutive seasons pitched without a losing record among pitchers primarily pitching in relief.

Following his playing days, Powell returned to Mississippi as coach of Jackson Academy, whom he led to the state championship in 2011. In 2020, he became an assistant girls softball coach at Jackson Prep.