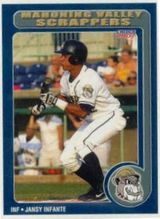 Jansy Infante was signed to the Cleveland Indians as a nondrafted free agent by Félix Fermín on December 8, 2004.

As a warm up to his first professional season, Infante hit .254 with 2 home runs, 11 RBI, and 10 runs scored in 16 games with the Dominican Summer League Indians-2.

Jansy was assigned to the Burlington Indians of the Appalachian League for the 2005 season. In 37 games, Infante had a .187 batting average with a triple, two doubles, and 19 runs scored. His 11 walks helped him to post a .247 on base percentage. His 6 stolen bases were good enough for third place on his team.

In 2007, Jansy was assigned to Mahoning Valley in the New York-Penn League where he increased both his batting average (.292) and his on base percentage (.377). The number of walks rose considerably (30) as Jansy started showing more patience at the plate. His base on balls total led his team, and he also led the Scrappers in runs scored with 39. Against the Auburn Doubledays on June 26, he reached base 5 times in 5 at bats with 4 hits and a walk. On July 4, Infante went 5 for 5 with 2 doubles, 2 RBI, and 2 runs scored against the Jamestown Jammers. In late July and early August, Jansy put together a 10 game hitting streak. In the field, he spent most of his time at third where he played 39 games. He got into 20 games as a second baseman and 6 as a designated hitter.

Infante was chosen for the 2007 New York-Penn League All-Star Game. The all-stars were divided between American League and National League affiliates. Jansy came in for the Americans as a defensive replacement in the top of the sixth inning taking over for Justin Henry at second base and stayed in the rest of the game. In the bottom of the eighth, he singled up the middle to score Manuel Rodriguez. He was 1 for 2 with the RBI as the American League all-stars won 6-4.[1]

On November 23, Infante had one at bat for the Águilas Cibaeñas in the Dominican Winter League. He struck out.

Infante played just 3 games with Mahoning Valley in 2008. He was quickly moved up to Lake County in the South Atlantic League. While in Lake County, Jansy hit just .125 in 19 games. Despite this, Infante was moved up to the High-A Kinston Indians in the Carolina League shortly after the retirement of Dan Cevette in July. In his first game with his new team, Jansy went 1 for 1 as a pinch hitter with a triple and a run scored.[2] On August 4 against the Myrtle Beach Pelicans, Jansy was asked to come in and pitch during a blowout. He gave up five earned runs without getting any hitters out for an ERA of infinity. He was relieved by another K-Tribe position player, Jerad Head.