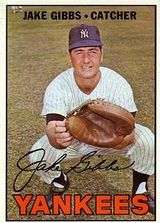 Catcher Jake Gibbs played a decade with the New York Yankees. After backing up Elston Howard for a number of years, he was the team's first-string catcher during the heart of the second dead-ball era, from 1967 to 1969. He eventually lost the first-string job to Thurman Munson, but continued as a back-up with the team through 1971.

He also was a quarterback on the college football team at the University of Mississippi and is a member of the College Football Hall of Fame [1]. After his major league career ended, he returned to Mississippi and was their baseball coach for 19 seasons (1972-1990). Among the players at Ole Miss during that time were Jeff Fassero and Tucker Ashford.