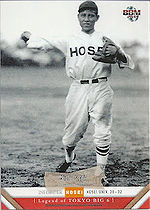 Hisanori Karita is a member of the Japanese Baseball Hall of Fame, a figure from the earliest days of Japanese pro baseball. He was noted for his smooth turning of the double play at second base.

Karita later served as an umpire and broadcaster (for NHK) before being inducted into the Japanese Baseball Hall of Fame in 1969.

This biographical article is missing the person's: death place
Retrieved from "https://bpv.baseball-reference.com/bpv/index.php?title=Hisanori_Karita&oldid=716946"
Categories: