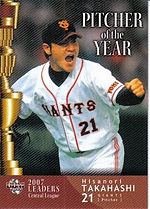 Hisanori Takahashi pitched for a decade for the Yomiuri Giants, once leading the Central League in ERA. He was a one-time All-Star in Nippon Pro Baseball.

Takahashi was 60-11 with a 2.58 ERA in college. He played for Toshiba in the industrial leagues. Hisanori played for Japan in the 1998 Asian Games. He was a first-round draft pick of the Yomiuri Giants in 1999.

Takahashi was 9-6 with a 3.18 ERA as a rookie in 2000. He was 7th in the Central League in ERA between Tetsuro Kawajiri and Daisuke Miura. He was third on the Giants in ERA behind Kimiyasu Kudoh and Darrell May. In the 2000 Japan Series, Takahashi pitched a game five shutout against the Daiei Hawks, who featured a potent lineup including Koji Akiyama, Tadahito Iguchi, Kenji Johjima, Hiroki Kokubo and Nobuhiko Matsunaka. The Giants took the Series in six games.

Takahashi moved to relief in 2006, splitting the closing role with Kiyoshi Toyoda. He was 2-6 with 15 saves and a 4.94 ERA, not as good as the right-handed Toyoda. Back in the rotation, Takahashi had a career year in 2007. He went 14-4 with a 2.75 ERA and made the CL All-Star team. He led the league in ERA by .09 over Seth Greisinger. He also was among the leaders in wins (tied with Kenichi Nakata and Tetsuya Utsumi for second, 2 behind Greisinger), innings (186 2/3, 3rd), homers allowed (21, tied for first with Takahiro Aoki and Kazuhisa Ishii), shutouts (2, tied for second, one behind Miura), hits allowed (168, 8th), walks (50, tied for 7th) and strikeouts (141, 8th). He was named to the Best Nine as the top hurler in the CL but the Pacific League's Yu Darvish got the Sawamura Award as the top pitcher in Nippon Pro Baseball. 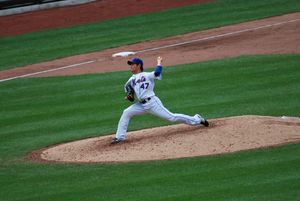 Pitching for the Mets

A free agent after the season, Takahashi announced plans to try to make the major leagues. He signed a minor league contract with the New York Mets in February. He made the major league roster out of spring training. His debut in The Show came on April 7, New York's second game of the year. He entered to begin the 10th inning in a 6-6 game. Wes Helms greeted him with a single and was bunted over by Chris Coghlan. Ronny Paulino hit a pinch-hit RBI single, then Hanley Ramirez was intentionally walked. Fernando Nieve relieved Takahashi, who would take the loss.

His fastball has been timed at a peak of 92 mph, and the best breaking ball of his package is a screwball.