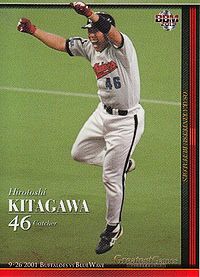 Kitagawa won a batting title in college and was on Japan's college All-Star team. The Hanshin Tigers took him in the second round of the 1994 draft, after they picked Hiroki Yamamura in the first round. Kitagawa was MVP of a minor league All-Star game in 1995. He made his NPB debut in mid-August as a backup catcher. His first hit came off Hiromi Makihara. He was 2 for 16 with 3 walks and a run as a rookie and allowed 11 steals in 13 tries. Moved to third base in 1996, he went 6 for 29 with a double, 3 walks, four runs and a RBI while handling only two chances (no errors). He was 0 for 2 in 1997 and did not take the field for Hanshin.

The Itami native was only 1 for 18 with a walk, double, run and RBI in 1998, now back at catcher as a backup to Akihiro Yano. In 1999, he hit .152/.188/.197 in 74 plate appearances as Yano's primary backup. He had no errors and three passed balls while throwing out 6 of 12 would-be base-stealers. He was 0 for 7 with a walk in 2000. After years of being on the bench, he was traded with Toshiro Yufune and Kazuharu Yamazaki to the Kintetsu Buffaloes for Tetsuji Mende, Koji Hirashita and Hiroki Sakai; Kitagawa was the only one who did much after the deal, which revived his career.

Kitagawa became Kintetsu's starting backstop his first year with them. He hit .270/.355/.440 with 14 doubles, 6 homers and 35 RBI in 229 plate appearances, fielding .991 but only throwing out 16.7% of attempted base-stealers. His first NPB homer came off Kazumi Saitoh. On his 29th birthday, he had his first sayonara hit. On September 26, he had one of the biggest hits in NPB history. With his team down 5-2 in the bottom of the 9th, skipper Masataka Nashida had him pinch-hit for Kenji Furukubo against Masanobu Okubo with the bases loaded. He promptly hit the 6th pinch-hit, come-from-behind, sayonara grand slam in NPB annals and the first that clinched a pennant. Furukubo had been the only remaining player from the last Kintetsu team to win the Pacific League pennant. Kitagawa was then 7 for 14 with a walk and a double as one of the Buffaloes' top batters in the 2001 Japan Series, which they lost to the Yakult Swallows. The Fighting Spirit Award (MVP of the losing team) went to Tuffy Rhodes, who hit two homers.

Kitagawa was the starting first baseman, usually hitting 5th behind Yoshitomo Tani and Cliff Brumbaugh, in the first Orix Buffaloes campaign of 2005. He got the first Orix Buffaloes homer (off Shuichiro Osada) after having gotten Kintetsu's final one the year before. His offensive numbers were down for the year, though: .259/.319/.435, 28 2B, 16 HR, 67 RBI, 36 BB. He did tie Matt Franco, Atsunori Inaba and Alex Cabrera for 4th in the PL in doubles.

The old-timer hit .265/.340/.449 with 13 homers in 2008, now mostly a DH after Orix had acquired Cabrera (despite his excellent fielding percentages, Kitagawa was not a premium defender due to his poor range. A muscle pull that year didn't help). He again led in sacrifice flies, this time with 10. He bounced between 3B, 1B and DH in 2009, fielding .935 at the hot corner as he battled for time there with Greg LaRocca, Makoto Shiozaki and Jose Fernandez. He hit only two homers that year, batting .273/.329/.363.