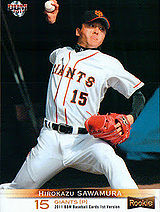 Hirokazu Sawamura won the 2011 Central League Rookie of the Year Award in a landslide. He later played in the U.S. major leagues.

Sawamura was 19-14 with a 1.31 ERA and 266 strikeouts in college; he was timed at 97 mph. He pitched for Japan in the 2009 Asian Championship. He got the call in the finale and allowed only two hits and one run in beating South Korea to clinch the Gold Medal for Japan. He turned down offers from Major League Baseball. The Yomiuri Giants took him in the first round in the 2010 draft.

As a rookie in 2011, the Chuo alumnus was 11-11 with a 2.03 ERA. He cruised to the 2011 Central League Rookie of the Year Award, with 235 of 249 votes; second place went to fellow 2010 first-rounder Daiki Enokida with 7 votes. Sawamura was the first Rookie of the Year with 200+ innings since Hideo Nomo in 1990 and the first Central League Rookie of the Year with 200+ innings since Shigeyuki Takahashi in 1964. He was among the CL's top 10 in numerous pitching departments: ERA (3rd behind Kazuki Yoshimi and Tetsuya Utsumi), innings (5th between Atsushi Nomi and Yoshimi), losses (tied for 5th), wins (tied for 6th with Shohei Tateyama), complete games (5, tied for second with Yoshimi), homers allowed (14, tied for 3rd with Yuya Fukui and Kenta Maeda), hits allowed (149, 8th between Nomi and Tateyama), strikeouts (174, 3rd behind Maeda and Nomi), wild pitches (6, tied for 3rd), walks (45, tied for 8th with Minoru Iwata and Randy Messenger), WHIP (0.97, 3rd behind Yoshimi and Tateyama) and opponent average (.210, 3rd behind Iwata and Yoshimi). He became the 4th straight Giant to be named Rookie of the Year, the first team to pull off four in a row. He followed 2008 pitcher Tetsuya Yamaguchi and outfielders Tetsuya Matsumoto and Hisayoshi Chono.

His numbers dropped in 2012 but it can hardly be called a sophomore slump at 10-10, 2.86. He tied for 8th in the CL in wins and was 5th with 137 K (between Messenger and Bryan Bullington). He was absolutely dominant in 2012 Japan Series Game 2, beating Masaru Takeda and the Nippon Ham Fighters with seven shutout innings (three hits, no walks) before Yamaguchi and Scott Mathieson closed it out. In Game 6, he threw five shutout innings but then gave up a three-run homer to Dai-Kang Yoh in the 6th and wound up with a no-decision; Yomiuri won the game and the Series. The Series MVP went to staffmate Utsumi. Yomiuri also won the 2012 Asia Series and he shut down the host Lotte Giants in the semifinals.

He had a 2.70 ERA for Japan in the 2013 World Baseball Classic and his four appearances tied Masahiro Tanaka and Hideaki Wakui for the team lead. He made the CL team for the 2013 NPB All-Star Games, following his 2011 All-Star nod (through 2020, they were his only All-Star picks). He was 5-10 despite a 3.13 ERA for the 2013 Giants. He was 7th in the league in ERA (between Tomoyuki Sugano and Bullington), 5th in strikeouts (between Toshiya Sugiuchi and Kazuki Mishima) and tied for 4th in losses (with Yudai Ono, Kan Otake and Shinji Tajima). He was used in relief in the 2013 Japan Series, pitching in four of the seven games as the Giants fell to the Rakuten Golden Eagles. He had a 4.05 ERA; he tied Mathieson and Yamaguchi for the team lead in appearances in the Series.

The Tochigi native had a 6-4, 2.66 record with 37 saves in 63 games in 2016. He tied Yamaguchi for 7th in the league in pitching appearances and he led in saves (3 ahead of Nakazaki). He was part of Japan's designated pitcher pool for the 2017 World Baseball Classic but was not activated. He battled shoulder paralysis that year, attributed to accupuncture, and only pitched ten games in the minors. He pitched fairly regularly for Yomiuri in 2018 but was a shadow of his former self at 1-6, 4.64 in 49 games (he did fan over a batter per inning). Yomiuri could have used a reliable closer with Arquimedes Caminero struggling. Sawamura did wind up as the team's most-used hurler, with 13 more appearances than Koji Uehara.

On February 16, 2021, after ten seasons in Japan, he signed a two-year contract with the Boston Red Sox. He was a true free agent and did not need to go through the posting system as a result. In fact, he had spent all of 2017 in the Japanese minor leagues, and had appeared at that lower level for a little bit each of the following three years in addition to pitching for Yomiuri and briefly for the Chiba Lotte Marines in 2020.

In his MLB debut on April 2nd, he closed out a 3-0 loss to the Baltimore Orioles. Relieving Austin Brice, he struck out Austin Hays and got Maikel Franco on a grounder. Freddy Galvis doubled but Sawamura retired Pedro Severino to end the frame. He earned his first MLB win on April 23rd, after pitching 1 1/3 innings of scoreless relief against the Seattle Mariners. Sawamura was placed on the injured list on July 23rd due to right triceps inflammation; he returned to the Red Sox on July 30th.

With an overhand delivery, Sawamura throws a 90-92 mph four-seam fastball (tops out at 96 mph), slider, occasional curveball and a splitter.