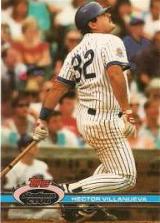 In the 1984 Amateur World Series, catcher Hector Villanueva backed up Jose Lorenzana for Puerto Rico and hit just .154/.154/.231 in 5 games. Villanueva was signed as a free agent for the Chicago Cubs by scout Joaquin Velilla on March 26, 1985.

Following his brief major league career, Villanueva had a much longer career as the popular catcher for the Independent Atlantic League's Atlantic City Surf.

He coached for Puerto Rico in the 2006 Central American and Caribbean Games.