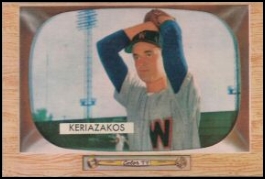 Gus Keriazakos pitched three years in the major leagues. He was named to the New Jersey Star-Ledger's All New Jersey high school All-Century Team of the 1940s, for his performance at Montclair (NJ) High School.

Most of his innings in the majors were pitched in 1954 with the Washington Senators. His ERA of 3.77 was better than the team's ERA of 3.84. He was not the youngest pitcher on the staff, however, since 20-year-old Camilo Pascual pitched 119 1/3 innings.

His daughter is a real estate broker in North Carolina.