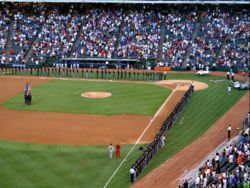 Globe Life Park in Arlington is a ballpark that, along with Jacobs Field in Cleveland, tried to capture the "retro-era" feeling of Oriole Park in Baltimore. Former Rangers' managing general partner (and future President) George W. Bush said the design of the park reminds him of the Texas state Capitol. The granite and brick facades and murals are strictly Texan (longhorns, Lone Stars, cowboys), and the park includes a 17,000 square foot baseball museum and a children's learning center, both open year-round. There's also a ballroom offering the largest banquet seating in Arlington (more than 2,000), to also be used year-round. A 14' high manual scoreboard in left can make things difficult for right-handed hitters.

David Schwarz, the architect of the stadium, declared that "We're the only stadium that I know of that is building the ballpark and then the neighborhood around it." Park has three decks and a roof all around except in center field, where beyond the wall is a four-story office building housing the Rangers' offices, local businesses, retail shops and ticket windows.

The financial company Ameriquest paid $70 million through 2034 for the naming rights to the stadium, although the banking crisis ended that deal well before its original due date. The field is located 22 feet below street level to avoid the summer winds that tortured Arlington Stadium. As for foul area – what foul area? The seats between the dugouts are the closest of any in baseball.

The park is part of a complex that features two man-made lakes (one named "Mark Holtz Lake"), walking area/jogging path, shops, restaurants, an amphitheater, and a little league field (built in the same "shape" as the big park). In right field, the second deck becomes the upper deck with a lower roof and a "short porch," called a "home run porch" similar to Tiger Stadium. 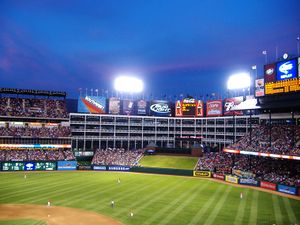 The ballpark at night

Initially, the ballpark was to just be called Rangers Stadium, and some got the idea it would be named after Nolan Ryan, but management decided to simply name it "the Ballpark" until securing a lucrative deal for naming rights. The park reverted to a generic name for a few years until another sponsor, the Globe Life and Accident Insurance Company (Globe Life for short), was found prior to the 2014 season.

Other bits of history:

After a few seasons of being the toast of the AL (and the club's first three division titles in 1996, 1998 and 1999), the Rangers had less success after the turn of the millennium. However, the confines of the park helped Alex Rodriguez (A-Rod) break the single-season home run record for shortstops (52) in 2001 – and break his own record again (57) in 2002. The Rangers regained competitiveness in the 2010s and the park was the site of the World Series in consecutive years in 2011 and 2012, with the Rangers coming on the losing end both times.

On June 11, 2013, the ballpark was the site of an unusual problem when a sinkhole opened behind the pitcher's mound, the result of a broken underground pipe. On-field batting practice before a game against the Cleveland Indians had to be canceled in order for the ground crew to fix the problem, digging a hole three feet deep to get to the pipe and fix it, and then managing to fill it over and repair the broken grass before the scheduled starting time for that night's game.

The Rangers got a neighbor when the Dallas Cowboys built a new stadium next to the baseball complex. In May of 2016, the Rangers announced plans for a new ballpark otriginally scheduled to open in 2021; it was built in Arlington near the existing ballpark and featured a retractable roof. The project was estimated to cost $1 billion. Voters approved public funding for the project in a ballot initiative in the 2016 elections and the firm HFK was retained the following January to provide a design. The timeline for completion of the project was moved forward by one year, to 2020. The new park will be called "Globe Life Field".