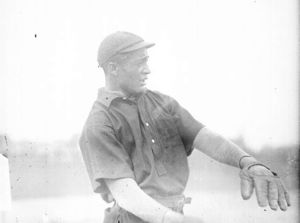 George Wright was the first shortstop for the Brooklyn Royal Giants, hitting .333 in the two games they played against other top black teams, second on the club. He moved to the Leland Giants in 1907 when they were not playing other top black teams. He hit .157 against top black pitchers in 1909 and went 1 for 8 in an exhibition against the Chicago Cubs. Moving to the Chicago Giants in 1910, he hit .231 while playing second base. He missed some time due to an illness.

In 1911, the 28-year-old infielder joined the new New York Lincoln Giants, hitting sixth and batting .417, best in the east, better than double-play mate Pop Lloyd. He went 2 for 5 against Walter Johnson in an exhibition game. He followed with a 2.92 campaign in 1912. Wright finished his career back in Brooklyn the next year.