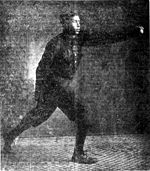 George Wilson was a Negro League and minor league pitcher.

Wilson played for Adrian in the 1895 Michigan State League, going 29-4 and hitting .327 as a pitcher-outfielder. It was his only minor league season as the minors were becoming increasingly segregated. He played for the Page Fence Giants then for the Columbia Giants after Page Fence disbanded in 1899. After that, he played for a string of smaller midwestern clubs.

In the 1907 Cuban Winter League, Wilson played for Habana, coming at the suggestion of a Johnson, most likely Chappie Johnson. He was 3-6 with a 5.83 ERA, hitting a league-high 11 batters. He spent 1907-1909 with Manitowoc, WI in the Lake Shore League.

Sources: Research by Gary Ashwill and Todd Peterson, The Biographical Encyclopedia of the Negro Baseball Leagues by James Riley