George Stone played briefly for the 1903 Boston Americans (who went on to win the inaugural World Series that year) and also was a star in Omaha and Peoria that year. In 1904, he played for Milwaukee, hitting .406 and leading the American Association in batting. After that season, he was traded with cash to the St. Louis Browns for Jesse Burkett.

Stone finally became a big league regular with the Browns in 1905 at age 28 and had a fine year, hitting .298 and leading the American League in hits. He dominated the AL the next season, hitting a circuit-best .358, but gradually slipped after that. In 1908, he came down with malaria, and the following year, his season was cut short when he suffered a broken ankle. 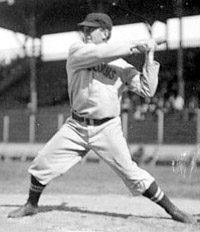 Stone was part owner of the Lincoln, NE baseball team in 1916. After baseball he was a banker and enjoyed playing the violin.

Stone is featured in the book "Great Jews in Sports". His inclusion was later found to be in error as Stone was not Jewish.