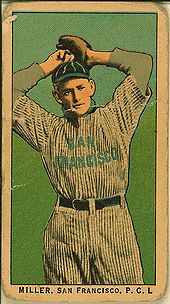 ". . . when he has his fast one burning the edges of the plate there are few baseball clubs along the big league highway that have a chance against him." - New York Times, August 21, 1919, about Frank Miller

Bullet Frank Miller pitched seven seasons in the majors. He was twice in the top ten in the National League in ERA.

An article in the New York Times of March 13, 1921, says that the Boston Braves were asking him to return to baseball, but Miller, at that time living in Bravo, MI, said that he was through with baseball and would "stick to the farm".