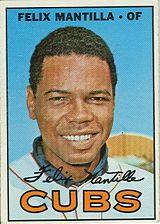 Felix Mantilla played 11 seasons in the majors, developing power near the end of his career. His 30 home runs with the Boston Red Sox in 1964 put him in the top ten in the American League.

He was the third baseman for the Puerto Rican national team that won the 1951 Amateur World Series for their lone world title (through 2018). He was signed by scout Hugh Wise. Mantilla was one of the early major leaguers from Puerto Rico, breaking into the majors one year after fellow Puerto Rican Roberto Clemente. Mantilla spent his first six years as primarily a back-up infielder with the Milwaukee Braves, never getting more than 251 at-bats in a season. He appeared in both the 1957 World Series and the 1958 World Series.

The new New York Mets took him in the expansion draft, and he spent the 1962 season with them. Although the team lost 120 games, Mantilla had a respectable season, hitting .275, which was the second-highest batting average among the regulars. He played mainly third base that year.

He was then traded to the Boston Red Sox, where he began to develop as a slugger. Not only did he hit 30 home runs in 1964, but the next year, 1965, his 92 RBI was fourth in the league while his 79 walks were third in the league.

He finished out his major league career with the Houston Astros in 1966.

His nickname was "El Gato", which means the cat. Félix played for the Caguas Creoles of the Puerto Rican Winter Baseball League.

Mantilla was quoted in the book I Had a Hammer (Hank Aaron's autobiography) as saying that manager Fred Haney would not play five black players at the same time if possible. That claim is analyzed in the book Rob Neyer's Big Book of Baseball Legends: The Truth, the Lies and Everything Else, with Rob Neyer basically coming to the conclusion that while Haney sometimes did not put five blacks on the field, Mantilla's performance at the time was not very impressive and might have justified leaving him on the bench a lot.