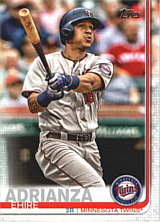 Ehire made his major league debut as a pinch-runner in the bottom of the 11th inning of a 2-2 tie against the Arizona Diamondbacks, running for Hector Sanchez. He advanced on a grounder by Gregor Blanco, then scored the game-winning run on a single by Angel Pagan. He saw action in four seasons as a utility man in San Francisco, never appearing in more than 53 games in any one season, and batted .220/.292/.313 in 154 games. Prior to the 2017 season, Ehire was designated for assignment by the Giants and claimed by the Milwaukee Brewers. His stint with the Brew Crew lasted a robust two days, where he was DFAed again and claimed by the Minnesota Twins. He became a versatile utility man with the move to Minneapolis, seeing time at four infield positions and the outfield while batting .260/.321/.391 from 2017 to 2019. On September 29, 2019, with the Twins having clinched the AL Central title, manager Rocco Baldelli handed the reins of being skipper off to Ehire. The Royals topped Minnesota, 5-4, on a walk-off sacrifice fly by Brett Phillips.