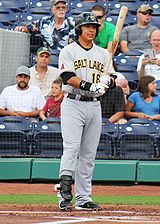 Efrén Navarro had a long road to the major leagues. He is a product of Major League Baseball's "Urban Youth Academy", a program designed to help young talent which have been fostered through the "Reviving Baseball in Inner Cities" program, implemented in areas where opportunities to play baseball and receive good coaching are few, and take those players through high school to possible scholarships. The UYA provides training facilities and coaching. Growing up in Compton, CA, a neighborhood known more for its prison and youth gangs than its baseball infrastructure, he was enrolled in the program under the tutelage of former major league catcher Darrell Miller and was able to get into the University of Nevada-Las Vegas as a result. Trayvon Robinson, who made his major league debut a few weeks before Navarro in 2011, was a graduate of the same program in Compton and the first player coming out of UYA to reach the big leagues.

It wasn't easy for Efren even after playing ball in college. He was only selected in the 50th round of the 2007 amateur draft by the Los Angeles Angels of Anaheim and had to make his way up the ladder with patience and hard work. After signing with scout Jeff Scholzen, it took him 5 seasons and 565 games to reach the major leagues, making his debut on September 2, 2011. He had hit .267 with 6 homers and 50 RBI for the Arkansas Travelers in 2010, then moved to the top prospect ranks withing the Angels' organization with a an excellent year in 2011. He hit .317, with 12 homers and 73 RBI for the Salt Lake Bees to get the call to The Show at the beginning of September.

Playing for the Toros de Tijuana in the Mexican League in 2021, he was named the MVP of the Serie del Rey, the league finals, during which Tijuana defeated the Leones de Yucatan, four games to three, after losing the first three games.