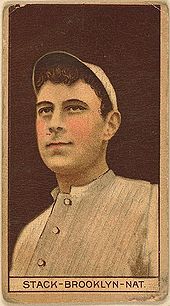 Eddie Stack pitched for five years during the deadball era. His record was 26-24. Stack was born in Chicago, IL and died in Chicago, IL, and also pitched in 18 games for the Chicago Cubs, going 4-3. However, he appeared in more games for the Philadelphia Phillies and the Brooklyn Dodgers.

He and George Chalmers were both 22-year-old rookie pitchers on the 1910 Philadelphia Phillies, the youngest players on the team. Moving to the Dodgers, he was the same age as teammate Zack Wheat, and his 7 wins in 1912 were the second-highest total on the team. His 2.38 ERA in 1913 was one of the lowest on the 1913 Brooklyn team, but he was traded in August for Ed Reulbach. In the rest of the season with the Cubs, he went 4-2.

He umpired one National League game in 1934.

One reference at baseballlibrary.com calls him Eddie "Smoke" Stack.

Eddie was apparently a teacher in Chicago, IL in the 1950s.