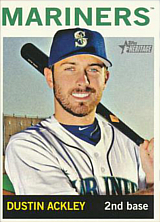 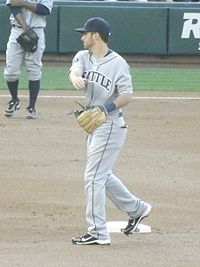 Dustin Ackley was the second pick in the 2009 amateur draft who played six seasons in the majors. His father, John, reached AAA.

Ackley was named an All-American by Louisville Slugger as a high school senior. He emerged as a superstar as a college freshman, hitting .402/.448/.591 and batting .442 entering the ACC title game before a late season slump. He set the UNC record for hits (119), leading all of NCAA Division I in the process. He tied Yonder Alonso and Brandon Waring for 8th in Division I with 74 RBI, tied Alonso for the ACC lead and was second in the ACC in batting average behind Tony Thomas. He hit home runs in both semifinal wins of the 2007 College World Series against Rice. Overall, he belted 3 homers with 8 RBI in the Series, in which UNC finished second. He was named to the All-Tournament Team at first base and was named ACC Freshman of the Year, chosen to the All-ACC team at first base, named Baseball America Freshman of the Year and named a third-team All-American by Baseball America, the American Baseball Coaches Association and Collegiate Baseball (Brett Wallace and Alonso were the more-honored first basemen). In the summer, Dustin batted .415/.586/.707 in 12 games for the Harwich Mariners before elbow surgery ended his season in the Cape Cod League.

As a sophomore, Ackley batted .417/.503/.597 and set a UNC record with 82 runs scored. He was named third-team All-American at first base by Baseball America (behind Justin Smoak and David Cooper) and Collegiate Baseball. He was second-team All-ACC behind Smoak. He became the first UNC player to top .400 twice and was second in the ACC in average (behind Buster Posey) and hits (116, 3 behind Posey). He hit .522 in the 2008 College World Series and was again chosen for the All-Tournament team. In 2009, the junior was hitting .412 with 22 homers entering the CWS, leading the ACC in average, homers and slugging and setting a UNC record in total bases. He was a consensus All-American and UNC's all-time leader in average, hits, runs scored and total bases. The Seattle Mariners picked him second overall in the draft, following Stephen Strasburg; he was the first Tar Heels player to go that high since Paul Shuey in 1992. Ackley was 8-for-16 in the CWS; his 28 career hits in CWS play broke Sam Fuld's record. He made the All-Tournament team once again.

Dustin hit the first home run and collected the first RBI of the 2012 season, connecting off the Oakland Athletics' Brandon McCarthy for a solo shot in the 4th inning of the opener at the Tokyo Dome on March 28th. In the 11th, he drove in Brendan Ryan with a single for what proved to be the winning run, then stole second and came in to score an insurance run on Ichiro Suzuki's single as the Mariners opened the season with a 3-1 win. He was the Mariners' starting second baseman all season, playing 153 games and getting 607 at bats, but hitting only .226/.294/.328 with 12 homers in a disappointing first full season. He improved a bit in [2013 Mariners|2013]], as his line rose to .253/.319/.341 in 113 games, but he still hit only 4 homers and drove in 31 runs. He began to move around the field that year, playing 53 games at second, but also 50 in center field, 11 in left field and 6 at first base. In 2014, he was the team's starting left fielder, getting into 143 games during which he hit .245/.293/.368 with 27 doubles, 14 homers and 65 RBI. His production was good for an OPS+ of 99 in his best showing since his rookie year, but it still fell short of expectations.