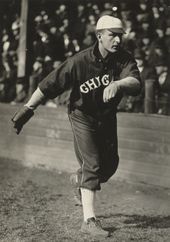 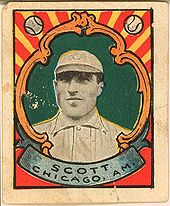 Death Valley Jim Scott had a picturesque name and pitched nine seasons with the Chicago White Sox during the Deadball era. He roomed with Buck Weaver and did a vaudeville act with Weaver. He and Weaver married two women in the act who were sisters.

His name derived from a notorious con artist of the time, one Walter Scott known as "Death Valley Scotty", who had tricked a number of persons to invest large sums of money in a non–existent gold mine in Death Valley, California. For his part, Jim Scott had never been to Death Valley. He was born in the legendary Wild West town of Deadwood, SD (which was still in the Dakota Territory at the time) only twelve years after Wild Bill Hickok was shot in a saloon there. He grew up in the no-less exotic town of Lander, WY, where his father operated the telegraph office and a photography studio.

Jim Scott began playing baseball around the Midwest and became a pitcher in 1907. After winning 30 games for Wichita in 1908, he was signed by the Chicago White Sox for the 1909 season. Scott came to the White Sox shortly after their championship of 1906 and their finishing 1½ games from the title in 1908, and left the team just before the end of its next world championship season in 1917. However, the teams for which he played were mediocre to poor, explaining why he had only two winning seasons in his career in spite of some solid pitching.

He began his major league career by pitching a shutout against the St. Louis Browns in his debut on April 25, 1909, on his way to winning 12 games with a 2.30 ERA in over 250 innings as a rookie. He followed that with an 8-18 season in 1910 when he was the victim of terrible run support, since his ERA was a league-average 2.43. He had a wide arsenal of pitches, including a fastball, a screwball and a variety of spitballs. He used a deceiving "clockspring" delivery and often experimented with different arm angles and motions to keep batters off their stride. He also had one of the best pick-off moves among right-handed pitchers of his era, a definite plus at a time where small ball tactics were predominant.

In 1911, Jim Scott bounced back with a 14-11 record with a 2.39 ERA, then started 1912 on a good note by pitching 15 scoreless innings against the Washington Senators on April 20. However, he was bothered by rheumatisms after that game, and only pitched six games over the season. He came back strong in 1913, starting 38 games and pitching another 10 in relief to throw 312 ⅓ innings, while topping 20 in both the win and loss columns. His ERA was a remarkable 1.91 and he was invited by Charles Comiskey to take part in the world tour he organized during the 1913-14 offseason. He slumped to a 14-18 record in 1914, with a 2.84 ERA. On May 14, he pitched nine no-hit innings against Washington, but lost the game on a run in the bottom of the 10th. He did better in 1915, as the improved White Sox pushed him to a 24-win season with a league-leading 7 shutouts. He fell to 7-14 in 1916, but by 1917, Chicago was once again one of the best teams in baseball. On July 6, he stopped Ty Cobb's 35-game hitting streak, and his ERA was below 2.00, but within a few weeks he had left his teammates when the United States declared war on Germany, becoming one of the first Major League players to enlist in the military in World War I.

He was in the military in 1917 through part of 1919. He declined an offer to return to the White Sox in 1919 and instead pitched for a semi-pro team and then joined the Seals of the Pacific Coast League, for whom he led the league in ERA in 1920. He stayed with them through 1924 and then was with New Orleans for three seasons. He also moved permanently to California at that time, where he would reside until his death.

After his playing days he became a minor league and then a major league (1930-1931) umpire. After his umpiring days he was an electrician for the RKO and Republic studios in Hollywood. He was also active in an evangelical ministry for a period.

Major source: 1922 San Francisco Seals. Scroll down to find the paragraph about Scott.