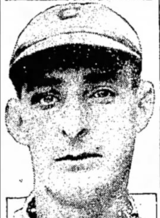 Cliff Lee hit .300 during an eight-year career in the majors, mostly in the lively ball era. He played 300 games in the outfield (primarily left and right), 86 at first base and 52 at catcher. He made his major league debut chiefly as a catcher.

Lee and Pug Griffin are the only two major leaguers born in 1896 in Nebraska.

Lee's best year in the majors was 1922, when as a regular outfielder for the 1922 Phillies, he hit .322 and slugged .540. The team lost 96 games but Cliff was one of the stars with the highest SLG among the regulars.

After a good year with the 1925 Indians under skipper Tris Speaker, Cliff didn't hit well in 1926 and found himself back in the minors with Newark in 1927. He spent three years with Newark and closed out his minor league career with Seattle.

He is not to be confused with the other Cliff Lee.