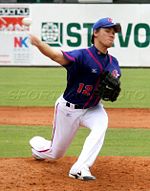 Chen-Chang Lee was one of Taiwan's top college prospects in the middle of the first decade of the 21st Century. He was on Taiwan's senior national team roster for the 2008 Olympics. With a low three-quarters arm slot (nearly sidearm) Lee has been timed at 97 mph at his peak. He throws a slider and forkball in addition to the fastball.

Lee was with Taiwan for the 2004 World Junior Championship. He pitched 2 2/3 scoreless innings against the USA, striking out four. Against Japan, he had a no-decision versus Yu Darvish, allowing one earned run in 3 2/3 IP. It was rumored in October of 2005 that the Cleveland Indians had made an offer to Lee and had been turned down.

Lee threw 7 hitless, scoreless innings against the Czech Republic in the 2006 World University Championship. Against Cuba, he allowed two hits in 8 1/3 innings and fanned 6; Taiwan went on to win in 15 innings, its first win against Cuba in a couple decades. He pitched for Taiwan's senior team in the 2006 Asian Games and 2006 Intercontinental Cup (10 H in 5 2/3 IP, 4.76 ERA, no decisions in two games). He pitched for the Anchorage Bucs in the Alaska Baseball League in 2007.

Scout Jason Lee of the Cleveland Indians signed Lee in September of 2008, reputedly for $400,000. The Indians had actually offered Lee a contract out of high school, but he went to college instead.

Taiwan made Lee their game one starter in the 2009 World Baseball Classic, facing South Korea. He was toasted for 6 runs in 1/3 of an inning for the loss. He started by walking Jong-wook Lee, hitting Keun-woo Jeong and walking Hyun-soo Kim; only 2 of his first 11 pitches were strikes. Tae-kyun Kim singled home two. Lee retired Dae-ho Lee on a long fly, then walked Shin-soo Choo. A grand slam by Jin-young Lee knocked out Chen-Chang, who was replaced by Kai-Wen Cheng.

Lee made his US debut on April 9, 2009, tossing two scoreless innings for the Kinston Indians against the Winston-Salem Dash.

Lee was awarded the Bob Feller Award for 2011 as the Cleveland Indians top minor-league pitcher of the year.

When Lee got the call to the Show on July 12, 2013, commentators remarked how appropriate it was that he was now pitching for the Indians, given his name comprised that of the Indians two most recent Cy Young Award winners - C.C. Sabathia and Cliff Lee. He made his debut for the team on July 14th, coming in in relief of Ubaldo Jimenez with a man on and nobody out in the 5th inning of a game against the Kansas City Royals. He proceeded to walk the first batter he faced, Salvador Perez, but retired the next three on fly balls to escape the inning unscathed. He then hit Johnny Giavotella with a pitch to start the 6th, but got Alcides Escobar to pop-up a sacrifice bunt attempt for the first out, at which point he was replaced by Rich Hill. Except for a bit of wildness, he had done quite well, allowing the Indians to come back and win the game, 6-4, with Hill getting credit for the win.