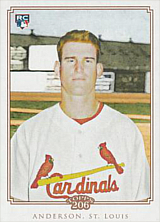 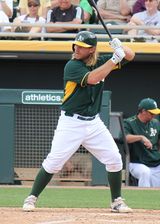 Bryan Anderson made his major league debut as a catcher with the St. Louis Cardinals in 2010 after playing for Team USA in the fall of 2007.

Anderson hit .396 as a junior in high school. He threw out 44 of 49 would be base-stealers and picked off 36 runners in his two seasons as a high school starter. He hit .414 as a senior. Anderson committed to the University of Arizona but the St. Louis Cardinals took him in the 4th round of the 2005 amateur draft. He was signed by scout Jay North and began his pro career that summer. In his first season, Anderson hit .331/.383/.513 and even stole six bases in seven attempts for the Johnson City Cardinals. Baseball America rated him the #10 prospect in the Appalachian League, one spot behind Aaron Cunningham. Max Ramirez was the only full-time catcher rated higher. Anderson would have ranked 4th in average had he qualified (he was eight plate appearances short). He led the league's backstops with 16 passed balls as Ramirez beat him out for the All-Star catching spot.

In 2006, Bryan batted .302/.377/.417 for the Swing of the Quad Cities. He led the league with 17 passed balls and would have been tied for fifth in average had he qualified. He threw out 36% of attempted base-stealers and was named to the Midwest League All-Star team at catcher. Baseball America picked him the league's #13 prospect, between Johnny Cueto and Oswaldo Sosa. He continued his fine contact hitting in 2007, batting .298/.350/.388 with the AA Springfield Cardinals at age 20. He finished fifth in the Texas League in batting average. In the 2007 Futures Game, Bryan started at catcher, batting 9th in the order for the USA. In the second, he struck out against Carlos Carrasco with two men aboard. In the fourth, against Henry Sosa, he grounded out to Joey Votto. Opposing baserunners were successful in three of four tries - Mike Saunders stole two, Chin-Lung Hu was one for two and Robinzon Diaz one for one. J.R. Towles replaced Bryan behind the plate. Anderson was named to the Texas League All-Star team as the circuit's top catcher that year. He joined Team USA that fall for the 2007 Baseball World Cup and hit .455/.538/.909 in four games while splitting catching duties with Jason Jaramillo and helped the US take its first Baseball World Cup Gold Medal since the 1970s.

In 2008, Bryan hit .388/.412/.525 in 19 games for Springfield and .281/.361/.379 for the Memphis Redbirds. Baseball America rated him the #14 prospect in the Pacific Coast League, between Nate Schierholtz and Franklin Morales. Anderson battled a shoulder injury in 2009, playing only 53 games for Memphis (.245/.293/.399) and 5 on a rehab stint with the GCL Cardinals. After a quick start in 2010, Anderson was called up to replace the injured Jason LaRue in the majors. He lined out against Matt Lindstrom in his first MLB at-bat, pinch-hitting for Yadier Molina. From 2012 to 2015, he logged brief big league time with the Cardinals, Chicago White Sox and Oakland Athletics.