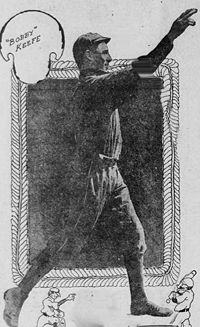 Bobby Keefe pitched three years in the majors. Five years of his minor league career were with Montreal, including in 1910 when he went 22-12.

He was one of the first players to come to the majors out of Santa Clara University, where he attended at the same time as Hal Chase.

Keefe made his major league debut with the 1907 Highlanders, posting a 2.50 ERA in 19 games. The team ERA was 3.03 and Keefe's 2.50 was the best on the team among players who appeared in at least ten games. Chase also played on the team.

In spite of Keefe's performance with the Highlanders, he did not come back to the majors until 1911, this time with the 1911 Cincinnati Reds. His 12 victories were second-best on the under-.500 team and his 2.69 ERA was the best among the starting rotation.