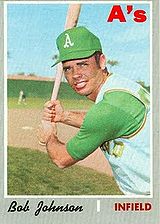 Bob Johnson played 11 seasons in the majors, hitting .272, a respectable average given that most of his career was in the second dead-ball era. He played 201 games at shortstop, 167 at second base, 166 at third and 107 at first base.

1962 was the only season when he had over 400 at-bats, serving as the regular third baseman for the Washington Senators under manager Mickey Vernon. In six other seasons he had 200 or more at-bats.

Johnson was born in Omaha, NE, and began his minor league career at age 18. He played in the minors from 1954 to 1959 before coming to the majors for the 1960 season with the Kansas City Athletics, for whom he played 76 games.

After the season he was picked in the expansion draft and spent part of 1961 with the Washington Senators. He also appeared in 91 games in the minors with the Rochester Red Wings, hitting .332 with 16 home runs. With the Senators he hit .295.

He moved around during the last three years of his major league career. Perhaps most notably he spent much of the 1969 season with the now Oakland Athletics, for whom he hit .343 in 72 plate appearances.

He is not to be confused with three other major leaguers by the same name: Indian Bob Johnson, Aurora Bob Johnson and Dallas Bob Johnson.