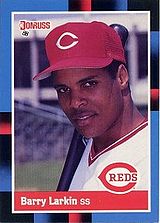 Inducted into Hall of Fame in 2012 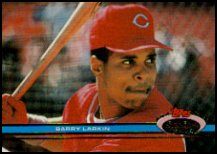 Barry Larkin was a prominent shortstop for 19 years in the major leagues. He was named to the All-Star team 12 times, won the National League MVP Award in 1995, and won 3 Gold Gloves. He played his entire career with the Cincinnati Reds. He was elected to the Hall of Fame in 2012 and inducted on July 22nd, alongside Ron Santo. A month later, the Reds retired his uniform number 11.

Larkin was born in 1964 in Cincinnati, OH where he was a three-sport star at Moeller High School. He graduated in 1982 and was drafted in the second round of that June's amateur draft by the Cincinnati Reds, but after distinguished careers in baseball and football that earned him scholarship offers in football from the University of Notre Dame and both baseball and football from the University of Michigan, he chose to play baseball at Michigan. He was the starting shortstop for the United States in the 1984 Olympics.

Larkin was once again drafted by the Reds with the 4th overall pick of the 1985 amateur draft. He signed with the Reds and scout Gene Bennett on June 7th. Larkin played with the AA Vermont Reds in 1985, then was the MVP of the American Association with the Denver Zephyrs the following year. He made his major league debut on August 13, 1986. 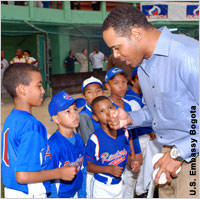 Larkin was a star almost from the get-go in the major leagues. He hit .283 in 41 games at the end of the 1986 season, proving that he belonged in the big leagues, but had a bit of an off-season in his sophomore year, 1987. He hit .244 in 125 games, which would prove to be the lowest batting average of his career, but still contributed 16 doubles, 12 homers, 64 runs and 21 stolen bases. In 1988, he made the All-Star team for the first time on the strength of a .296 batting average, 91 runs, 32 doubles and 40 stolen bases. He hit a dazzling .342 in 1989, but he missed most of the season's second half after being injured in the skills competition prior to the 1989 All-Star Game. In 1990, he was a key cog as the Reds led the NL West from start to finish, then upset the Oakland Athletics in a World Series sweep. He hit .301 with 85 runs that year, the second of five consecutive seasons in which he hit over .300. He was 6 for 17, good for a .353 average, during the World Series. In 1991, he reached 20 home runs for one of only two times in his career. By then, he had established himself as the best shortstop in the National League, a title he would not relinquish until the next decade. He won the 1993 Roberto Clemente Award and 1994 Lou Gehrig Memorial Award.

Larkin won a very close race to be named National League MVP over Dante Bichette of the Colorado Rockies in 1995. He hit .319 with 15 homers and 66 RBI and scored 98 runs that year; he also stole a career-high 51 bases. In his second and last taste of the postseason, he hit .385 in the NLDS in a sweep of the Los Angeles Dodgers, and .389 in the NLCS even though the Reds were swept by the Atlanta Braves. The following year, Larkin became the first shortstop to join the prestigious 30-30 club, hitting a career-best 33 home runs and stealing 36 bases. His season was even better than his MVP year: he scored 117 runs, drove in 89, and drew 96 walks, for an OPS+ of 154. There was nothing he couldn't do on a baseball field that year, but he was only 12th in the MVP vote as the Reds played poorly and voters felt he'd gotten his due the previous year. In 1997, he was named the first team captain since Dave Concepcion. He continued to play superlatively until 2000, when he hit .313 in 132 games at age 36 and made the All-Star team for the 11th time. In 2000, Larkin became the second NL shortstop (and fourth overall at the position) with a 5-hit, 2-homer game. The other player to do so had also been with the Reds - Roy McMillan in 1960 (in the AL, Cal Ripken, Jr. and John Valentin had performed the feat).

He was bothered by various injuries over the next three seasons and did not hit .300 again, but he was still good enough to play shortstop regularly when healthy - 145 games in 2002 with some doubles power, although his speed was pretty much gone. He played a final season in 2004, at age 40 and still held his own, batting .289 in 111 games while still not being moved off shortstop, two signs that he was a truly outstanding player. In recognition of a superlative career, he was named to the All-Star team one final time, bringing his career total to a remarkable 12 games.

Based on the similarity scores method, the most similar players to Larkin are Alan Trammell, Ryne Sandberg, Joe Cronin, Lou Whitaker, and Roberto Alomar. Because of the emergence of a generation of outstanding shortstops in the American League in the mid-1990s - Derek Jeter, Alex Rodriguez and Nomar Garciaparra - he lost a bit of his luster in comparison, as he was just slightly below those three as a hitter. However, he also did not benefit from the high-octane offensive era of the early 2000s like they did, as he was already past his peak by the time the offensive explosion began. When compared to middle infielders whose careers were in a similar offensive context however, such as Robin Yount, Sandberg, Whitaker, Trammell or Ripken, his career totals hold extremely well. In 19 season, he played 2180 games, hitting .295 with 2,340 hits, 1,329 runs, 441 doubles, 76 triples, 198 homers and 379 stolen bases. 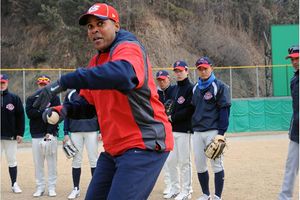 Larkin is the older brother of Stephen Larkin. On September 27, 1998, the Reds started an infield of Aaron Boone, Bret Boone, Stephen Larkin, and Barry Larkin, marking the first time in history that two sets of siblings made up an infield. Other brothers are Mike Larkin, who played football at Notre Dame, and Byron Larkin, all-time leading scorer in Xavier University basketball history.