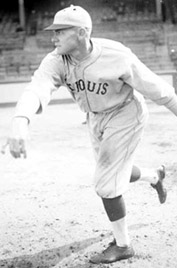 Outfielder Baby Doll Jacobson hit .311 over 11 seasons in the majors and hit over .300 in 7 straight years. Also known for his defensive skills, he at one time held 13 fielding records.

Jacobson began his pro career with the Rock Island Islanders of the Three-I League in 1909. Following three years with Rock Island, he played three more summers in the Southern Association, where he earned the nickname "Baby Doll" after a popular song of the era. After reaching the majors with the Detroit Tigers in 1915, he was traded to the St. Louis Browns during the season. However, after hitting just .211 in the majors, he was back in the Southern Association in 1916. After hitting a league-leading .346 for the Little Rock Travelers that year, he was back in the majors as a regular for the Browns in 1917.

After missing the 1918 season while serving in the naval reserves during World War I, Jacobson returned to St. Louis in 1919 and immediately was greatly improved at the plate, hitting .323 in his first year back. He had his finest big league season the next summer, hitting .355 with 122 RBIs in 1920. In 1921, he hit .352 and drove in 90 runs. The following September 9th, facing Detroit, he tied an American League record with 3 triples in a game. He hit .317 with a career-high 16 triples on the season, but the Browns finished in second place, one game behind the New York Yankees.

In 1924, Jacobson hit a career-best 19 home runs and recorded 484 putouts, a record that stood for 24 years. Dealt to the Philadelphia Athletics and then to the Boston Red Sox in 1926, he split his final big league season of 1927 between the Red Sox, Cleveland Indians, and the Athletics. Following his big league days, he played two more seasons of minor league ball.

After baseball, Jacobson farmed near Coal Valley, Illinois, from 1929 to 1960. He died at age 86 and is buried at Dayton Corners Cemetery in Colona, Illinois. 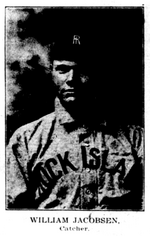 His contract card (in microfilm at the Hall of Fame) gives the following transaction information for his career prior to 1915: