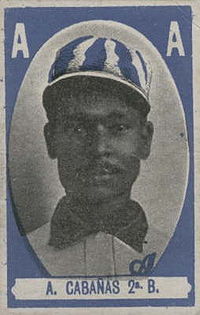 Armando Cabañas played in the Cuban Winter League and spent one summer in the Negro Leagues.

With Almendares in 1908-1909, Armando hit .189/.255/.233, continuing to form an infield with Cabrera at SS and Almeida at 3B; the 1B now was Regino García. He had a key role in one of the most famous games in Cuban history, on November 18, 1909. Against the Detroit Tigers, he manned second in Bombin Pedroso's 11-inning no-hitter against the Tigers. He was the game's offensive star, going 2 for 3 against Bill Lelivelt, and driving in the winner with a squeeze bunt. Defensively, his 7th-inning error on a Matty McIntyre grounder led to Detroit's only run. Overall, he hit just .133 in the exhibition series against the Tigers.

In 1910, Armando batted .176/.243/.235 as the starting second baseman for the Almendares championship team. He led the league with 68 AB. He hit .367 for the Stars of Cuba against top black US teams in the summer of 1910, placing him 4th among midwestern clubs, behind Pete Hill, Bruce Petway and teammate Luis Bustamante. Almendares won another title in 1910-1911, with Julián Castillo now joining Cabañas, Cabrera and Almeida won the infield. Armando hit .238/.322/.288, 3rd on the club in average behind major leaguer Armando Marsans and Heliodoro Hidalgo and ahead of players like Cabrera, Almeida and Castillo.

In 1959, he and Ramón Bragaña were inducted into the Cuban Baseball Hall of Fame, the next-to-last class.