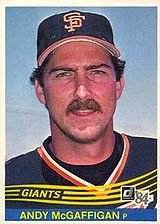 Pitcher Andy McGaffigan played for five different teams during eleven seasons in the majors. During his career, he posted a respectable 3.38 ERA.

He was originally selected by the Cincinnati Reds in the 36th round of the 1974 amateur draft, but he did not sign, opting to attend Palm Beach Community College instead. After being drafted by the Chicago White Sox in 1976, he instead moved on to Florida Southern College. In 1978, he led the Sunshine State Conference with 101 strikeouts, and his team went on to win the Division II College World Series. Overall, in two years with Florida Southern, he went 16-2 with a 2.79 ERA.

Taken by the New York Yankees in the sixth round of the 1978 amateur draft, McGaffigan was the Southern League Pitcher of the Year in 1980 with the Nashville Sounds. During the course of that summer, he won 12 straight games, led the circuit with a 2.38 ERA, and finished with a 15-5 record. Spending most of 1981 with the AAA Columbus Clippers, he was called up to the big leagues in September. He made his major league debut on September 22nd, throwing 3 scoreless innings of relief against the Cleveland Indians.

Prior to the 1982 season, McGaffigan was dealt to the San Francisco Giants along with Ted Wilborn for Doyle Alexander. He spent the majority of the summer with the Phoenix Giants, making 4 late-season appearances in the majors and earning his first big league win on September 25th against the Los Angeles Dodgers. He spent the entire 1983 campaign with San Francisco and went 3-9 with a 4.29 ERA in 43 outings split between the rotation and the bullpen.

He was acquired by the Montreal Expos at th end of March 1984, as compensation for the fact that P Fred Breining, whic had been acquired in a deal earlier that spring in return for 1B Al Oliver, turned out to be injured. McGaffigan went 3-4 with a 2.54 ERA in 21 games for the Expos before being traded to again, this time to the Cincinnati Reds for Dan Driessen in late July. After the deal, he recorded a 5.48 ERA in 9 appearances for Cincinnati. He began 1985 with the Denver Zephyrs and posted an 11-5 record and 2.95 ERA in 26 games. Called back up to the majors in late July, he made 15 starts for the Reds, going 3-3 with a 3.72 ERA.

Following the 1985 season, McGaffigan was traded back to Montreal as part of a six-player transaction that also included Bill Gullickson, John Stuper and Jay Tibbs. He made 48 appearances (14 starts) for the Expos in 1986, notching a career-high 10 wins and recording a 2.65 ERA; he started the year in the staring rotation but found his true calling when moved to the bullpen in July. The following season, 1987, pitching exclusively out of the pen, he saved 12 games while posting a career-best 2.39 ERA as part of a very strong Expos bullpen. He continued to be a key reliever for the Expos in 1988 and 1989.

Before the 1990 season, McGaffigan was traded back to San Francisco for a player to be named later, who turned out to be minor league OF Steve Hecht. However, he made just 4 appearances for the Giants and was released in late April. He was then signed by the Kansas City Royals and went 4-3 with a 3.09 ERA in 24 games, split between starting and relieving. He appeared in just 4 games for the club in 1991 before being released. He then was signed by the Milwaukee Brewers, but he only played at the AAA level and never made it back to the majors with them.