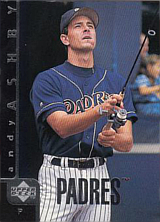 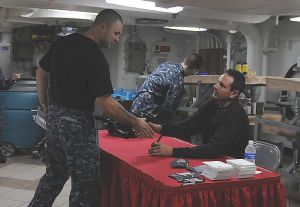 Pitcher Andy Ashby was signed as a free agent for the Philadelphia Phillies by scout Don Williams on May 4, 1986. In his second big league appearance, June 15, 1991, he became the 24th pitcher in big league history to pitch an immaculate inning, retiring Hal Morris, Todd Benzinger and Jeff Reed of the Cincinnati Reds in order on three strikes each.

Andy moved to the Colorado Rockies in the expansion draft, but saw his greatest success as a member of the San Diego Padres. A two-time All-Star as a Friar, he was 17-9 with a 3.34 ERA and a career best 151 strikeouts for the 1998 National League champions. On September 5, 1997, against the Atlanta Braves, he became only the third pitcher in Padres history to take a no-hitter into the 9th inning, after Clay Kirby (who was infamously lifted for a pinch-hitter trailing 1-0 after 8 no-hit innings) and Steve Arlin (whose bid ended with two outs in the 9th). In Andy's case, he allowed a lead-off single to Kenny Lofton, and later a two-run homer to Fred McGriff, but still received credit for a complete game win. His repertoire included a slider, change-up and a sinking fastball.

Ashby has done work with Fox Sports San Diego as an analyst since 2013. His nephew, Aaron Ashby made his major league debut in 2021.