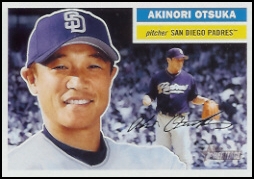 Akinori Otsuka had some family turmoil when he was young as his parents separated when he was in 9th grade and he lost his mother due to cancer. Out of college, he was the second-round pick of the Kintetsu Buffaloes in the 1996 NPB draft. Joining Kintetsu in 1997, he had a great rookie year at 4-5, 2.07 with seven saves in 52 games, allowing only 44 hits in 82 2/3 IP (walking 46) while striking out a whopping 127 as the most effective reliever on his team. In 1998, Akinori became the closer and went 3-2 with 35 saves, a 2.11 ERA and 84 strikeouts in 55 1/3 IP. He had 14 more saves than anyone else in the Pacific League and won the Fireman of the Year award. He made his only All-Star team to date that season.

Otsuka asked to be posted after 2002 but was not claimed by any MLB team. Teammate Norihiro Nakamura called this request to be posted selfish though he himself would ask to be posted three years later. Otsuka claimed that Kintetsu had arranged for him not to be picked and held out, demanding a trade. He was sold to the Chunichi Dragons, joining the club in mid-year and was 1-3 with a 2.09 ERA, 17 saves, 5 walks and 56 strikeouts in 43 innings, replacing Eddie Gaillard as closer during the season. Overall, he had gone 14-23 with 137 saves and a 2.39 ERA in his NPB career with 418 strikeouts, 117 walks and 237 hits allowed in 350 2/3 IP over 305 games pitched. Through 2005, he ranked 6th all-time in NPB in saves.

Otsuka again asked to be posted after 2003 and the San Diego Padres won his negotiation rights for $300,000. He signed for a two-year deal worth almost 2 million dollars. He had a dominating rookie year with the 2004 Padres, posting a 1.75 ERA and going 7-2 with 87 strikeouts in 77 1/3 IP. He declined the next year (2005) to 2-8 with a 3.59 ERA but still had a 107 ERA+; his record belied his efficacy on the mound. He was very good in the post-season, pitching three scoreless innings in three outings in the NLDS against the St. Louis Cardinals.

Akinori was, to many American fans, the second-most prominent name on Japan's 2006 World Baseball Classic roster behind Ichiro Suzuki, though quite a few performers on the club had better track records in NPB. Otsuka was Japan's most-used pitcher in the tournament, making five appearances and saving one game. He allowed 2 hits and one run in 5 2/3 IP, striking out eight and walking two. He tied for the most games pitched in the WBC and had the most games finished.

On January 6, he was traded with Billy Killian and Adam Eaton to the Texas Rangers for Adrian Gonzalez, Terrmel Sledge, and Chris Young. In his first season with the Rangers, he went 2-4 with 32 saves and a 2.11 ERA, walking only 11 in 59 2/3 IP and replaced Francisco Cordero as the Texas closer.

Otsuka was 2-1 with 4 saves and a 2.51 ERA in 34 games for the 2007 Rangers but an elbow injury limited his season and he was non-tendered after the year.

Otsuka is known primarily for his sinker, but employs other pitches including an especially hard slider. The slider breaks so far that 300-game winner Keishi Suzuki praised his fine forkball when Otsuka was, in fact, throwing his slider.

Otsuka became bullpen coach of the El Paso Chihuahuas in 2017.